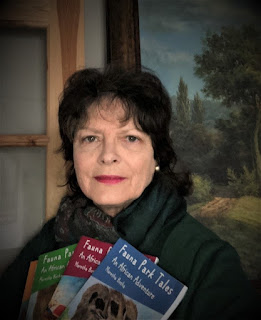 Maretha Botha writes and illustrates children’s books. She likes gardening and finds it a real pleasure to get stuck into planting things which have a good chance of growing well and not dying on her because of extreme heat, such as she experienced in Botswana.  She makes a conscious effort to have a bee and insect friendly garden, avoiding pesticides, sewing a summer meadow, making her own compost and looking after all manner of birds, trying her best to keep the neighbourhood pussy-cats away from young and inexperienced fledglings – not an easy task.


When she was younger, she used to love rock-climbing and mountaineering.  Nowadays she and her family hike on the moors in all sorts of weather, where the strong breeze quickly clears cobwebs, and the vistas provide much food for thought and inspiration. 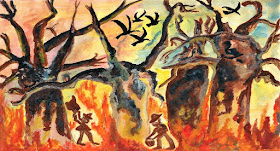 An excerpt from book 2, “Friends: An African Adventure – Fauna Park Tales”, Chapter 3.
THE FIRES WERE WIDESPREAD, BUT Flame kept on herding animals to safety despite the closeness of the flames. I was amazed – a sheepdog after all? He stopped suddenly, listening – his left ear stood up – just as if Cook Katie had starched it like one of her white linen napkins. What else could he possibly have heard amidst all the commotion? Then I also heard far-off sad cries. Flame dashed through the burned-out stubble in a westerly direction. Not worrying about his own safety, he touched the ground just here and there as he ran towards the Llokodi Hills. It was as if his Kalughari heritage gave him speed to run faster, and courage not to look back or feel the heat under his paws. The hills were burning brightly, and huge flames were everywhere. Dense, grey smoke hid the early morning sun, making breathing difficult.

Flame came closer to the spot from where the sounds had come. He saw a chilling sight, because a young female zebra and her two newborn foals were trapped! When the rest of their herd had moved to safety, she had waited for the foals to become stronger, but she had lingered too long.

Fires on one side and a small cliff on the other, prevented her from escaping. The flames were about to surround them. Flame had no time to bark advices to the zebras, so he scrambled up the side of the rock cliff. With a great leap, he cleared the fires and landed next to the zebras.


Unfortunately, the mother was so spooked that she kicked him in the ribs. He fell to the ground, winded. Fear gave her wings and she jumped up and over the flames. Flame got up, grabbed one of the foals by the back of its neck and dragged him to safety. Despite the pain in his side, Flame crawled back into the danger zone. Dense smoke was everywhere, and he coughed, battling to breathe. Still, he tried to drag the second one out of the fire’s reach, but he fell down.
Flame heard a loud kleeou-kleeou somewhere in the sky, but he couldn’t see a lone martial eagle flying above them. The clouds of smoke were too thick. The martial eagle kept circling lower, just staying out of the fire’s reach, chanting on and on, ‘Kleeou-kleeou! Remue-toi! (Get a move on!) Flame, don’t pass out. I’ll get help for you.’


THANK YOU SO MUCH RAVE REVIEWS BOOK CLUB AND THE BLOG POST HOSTS FOR YOUR WONDERFUL SUPPORT AND THE PRIVILEGE TO BE THE SPOTLIGHT AUTHOR THIS MONTH!